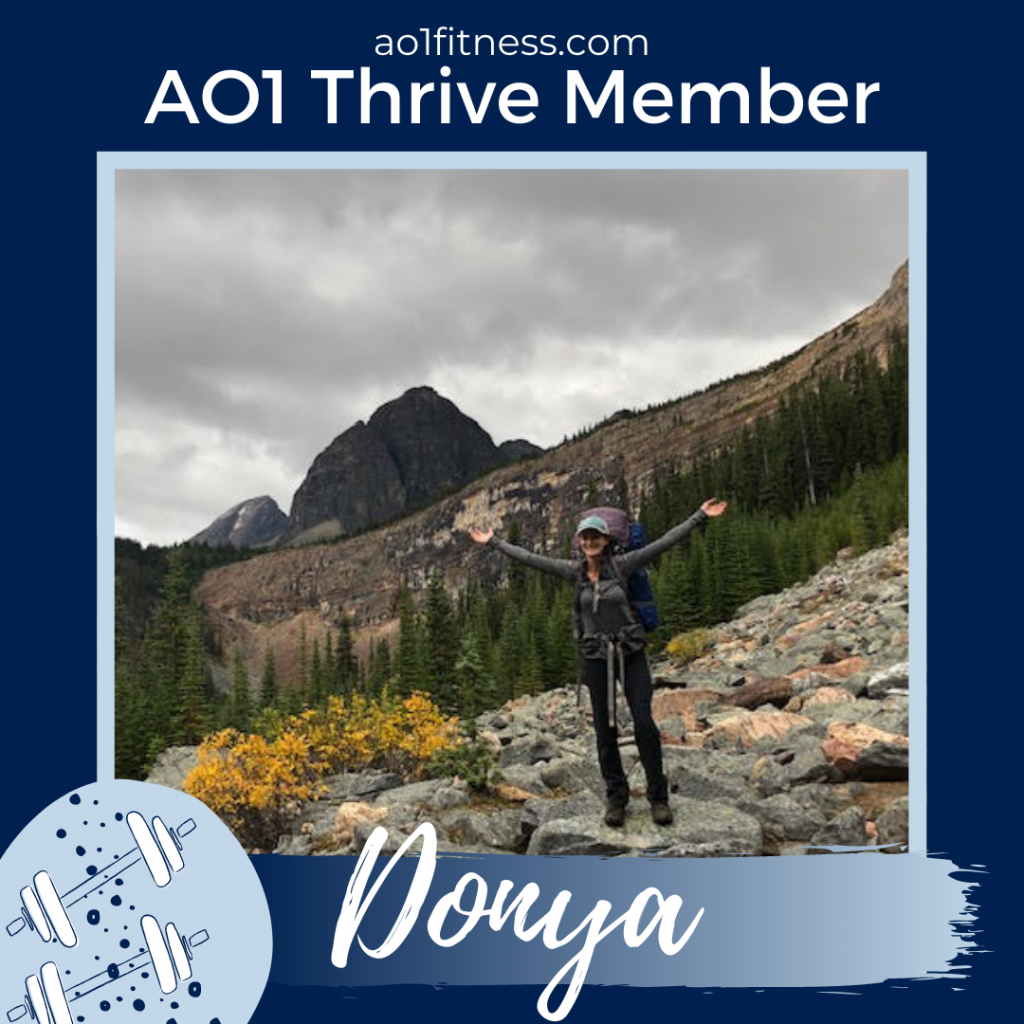 “I am really grateful for the Thrive classes each week. I look forward to them and am excited about the visible differences that I’m seeing and the differences in how I’m feeling as well.

The workouts definitely challenge me and I am excited about the progress that the consistency is bringing.

I appreciate that you have both the red and blue level program options and ways to adapt some of the movements too. I also appreciate the feedback each week from my coach Stefanie each week, as I learn the movements and how to benefit the most from them.

Thank you for everything!” 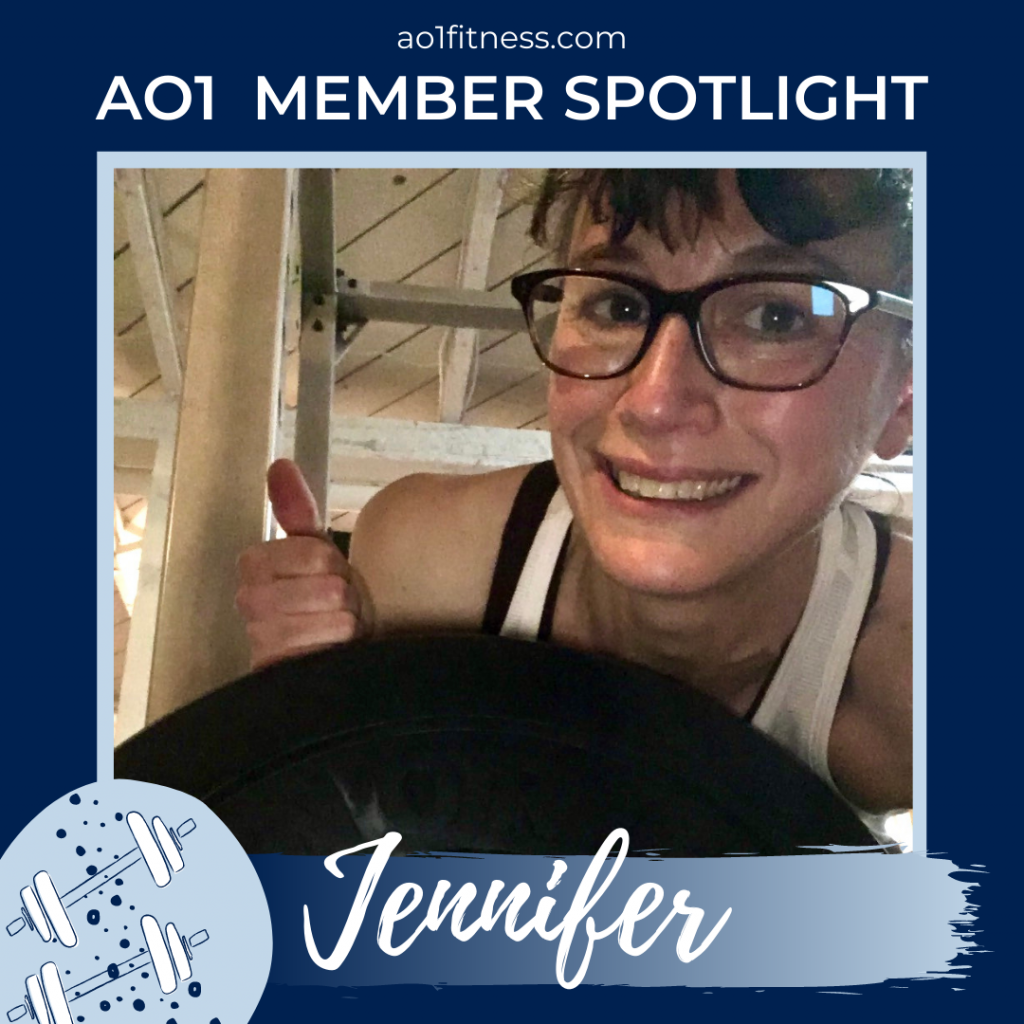 “I had some fitness equipment in my home and a good pair of runners, but I wasn’t using any of it effectively or frequently. I knew I needed some guidance.

Even though I had a decent fitness level, I was nervous to book an intro call with Coach Stef because she is so ripped that it intimidated me! I was wrong to be nervous – Stef paid very close attention to my frame of mind and where I was at in my own fitness before designing an appropriate, challenging, fun program for me.

With AO1’s highly personalized coaching and mindset training, I just completed a streak of working out 3x/week without fail for seven months! And even though I completed several road races and athletic tests in my 30s, I am probably the healthiest I have ever been in my life as I close in on 50. Coach Stef has helped me be able to do things like chin ups, olympic lifts, double unders, and sprint for the bus without breaking a sweat. And I am genuinely enjoying myself!

Coach Stef from AO1 Fitness is much more than your average fitness trainer – she is like a physiotherapist and mentor and nutritionist and sports psychologist all rolled into one. I am so glad I booked that intro call.” 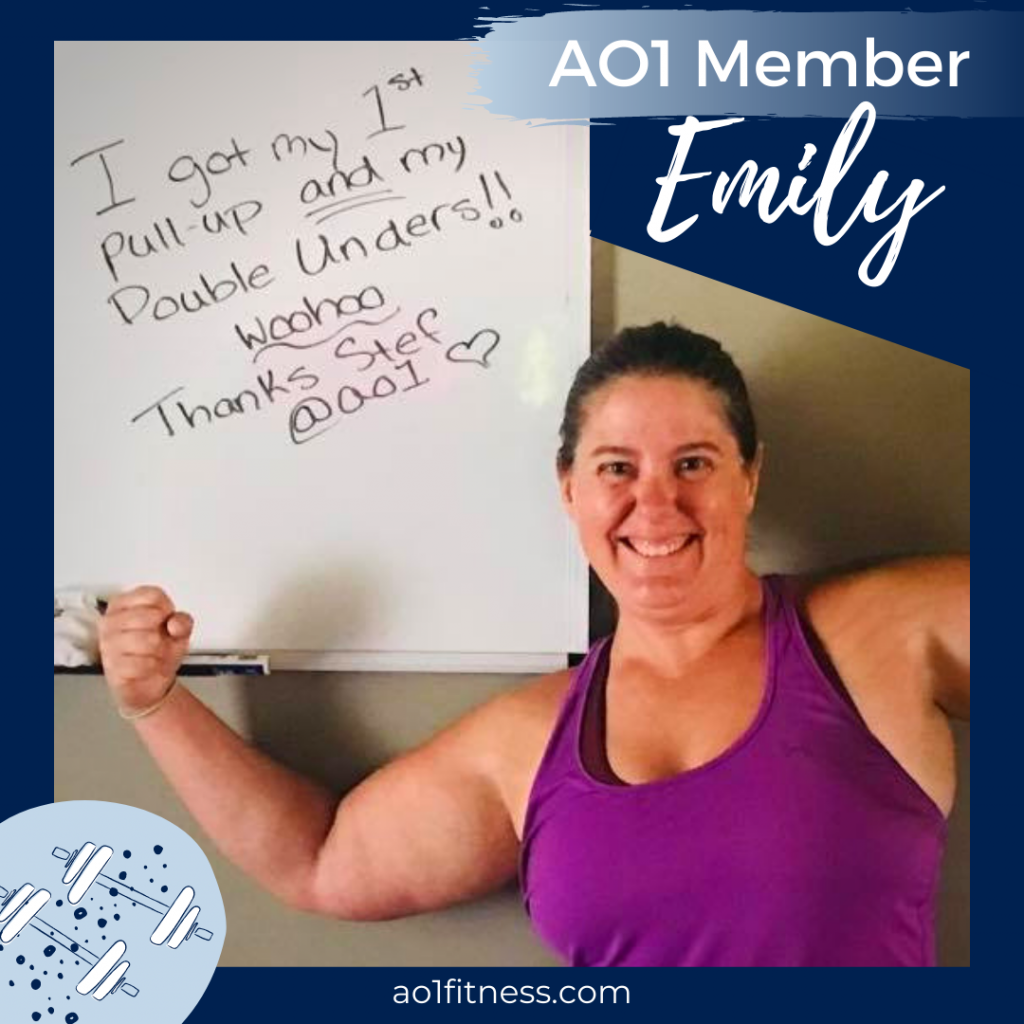 Emily is a busy mom who lives in a rural area with no access to a gym.

Emily and her husband joined AO1’s online platform and has consistently followed their personalized workout program from their home with the help of an AO1 online coach.

Every month she has experienced wins. Most recently she got her first pullup and double unders!

We are so proud of Emily! 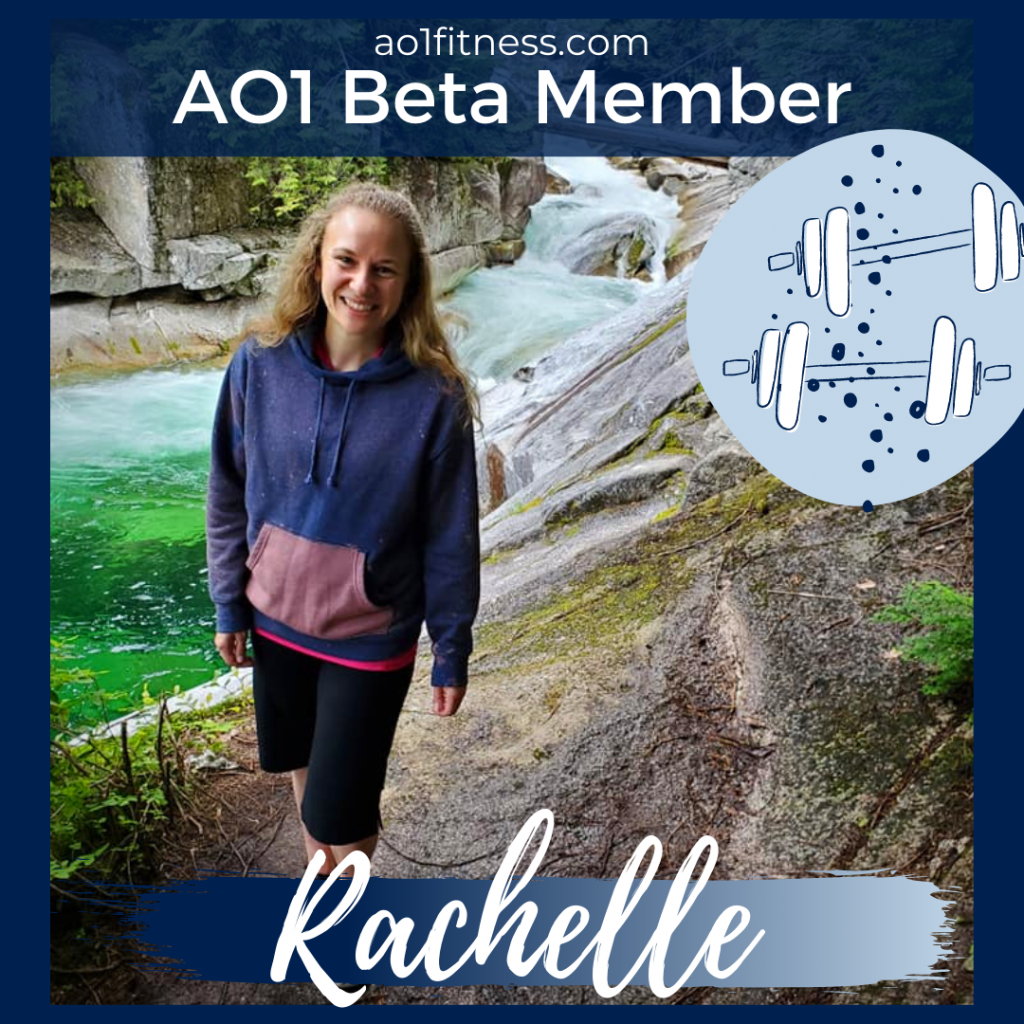 “I wanted to get back into exercising regularly but I needed accountability and outside motivation. I like that the workouts are effective (I’m much stronger than I was) and efficient (my time is well-spent!). I feel like an athlete again 🙂

My AO1 coaches  are very strong mentally and physically, and they’re also some of the most encouraging people I know! Their coaching helped me do my part to get through some pretty difficult seasons this year, including how I choose to see my circumstances.

I don’t get overwhelmed in my workouts anymore. I break it down and focus on the present round, rep, and movement. I also give my 100% effort in the last minute of every workout. This makes me feel capable the rest of the day!” 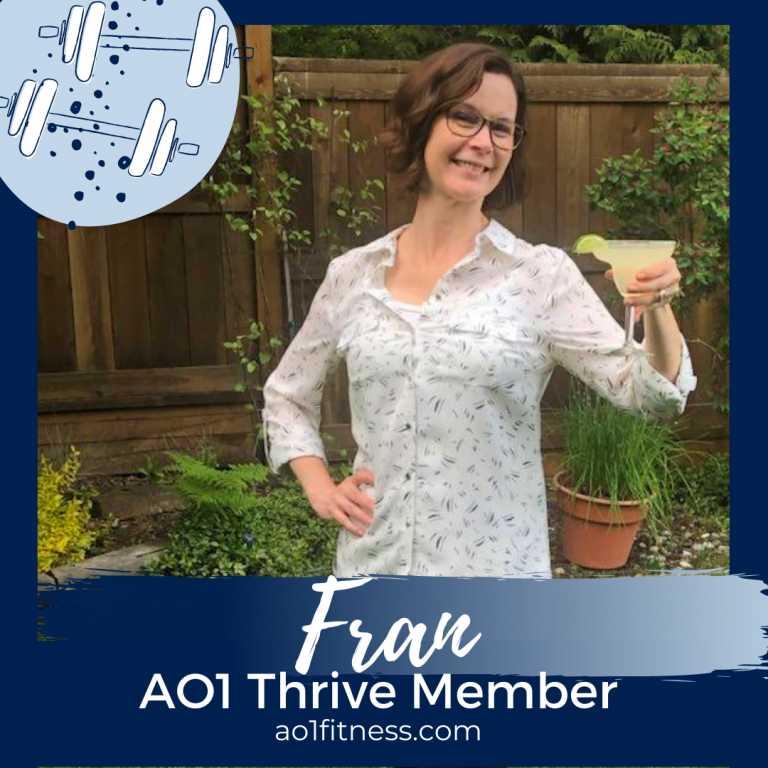 “I joined AO1Fitness February 2020 (about 1 year ago!) I’ve exercised for most of my life, but at the time I was not following any formal exercise regimen. I was looking for something new to keep me motivated and accountable. Then COVID happened…. AO1 is perfect for me. Easy to do from home, and I’m accountable to our online zoom workouts!

The workouts are fun, not too long, always different, and a good challenge. I like how they incorporate the whole body into a few targeted moves each session.

I like the routine of working out 3 days a week. Also the timing is easy to accommodate and it’s nice to do it from home instead of in a crowded, sweaty gym! I feel stronger and healthy, and with the endorphins from working out I feel better able to cope with life during COVID!

I enjoy the new coaching app, and communication with Jasmine and Steph is top notch! Also they are very respectful of your time and do not push extra/new/ add-ons. They are all about providing an amazing fitness/wellness service in a very friendly, caring, professional manner.

What do you feel you do well at?
I am very determined during my workouts. To complete the workout, to use correct form, to have a “negative split” with timing so that I get progressively faster or complete more reps for each timed/counted round. I like to push myself during the workouts as well to increase strength, and push through a difficult workout to complete it to the best of my ability.

There have definitely been positive changes! My upper body strength has improved and I feel more confident in my own skin knowing I’m taking care of myself. Being accountable to showing up for the workouts and challenging myself is also a win.

If someone was just starting their fitness journey, what advice would you give them?
Start slow and light and work your way up. Listen to your body. Stretch. Hydrate. Challenge yourself, don’t give up, and you will see results! 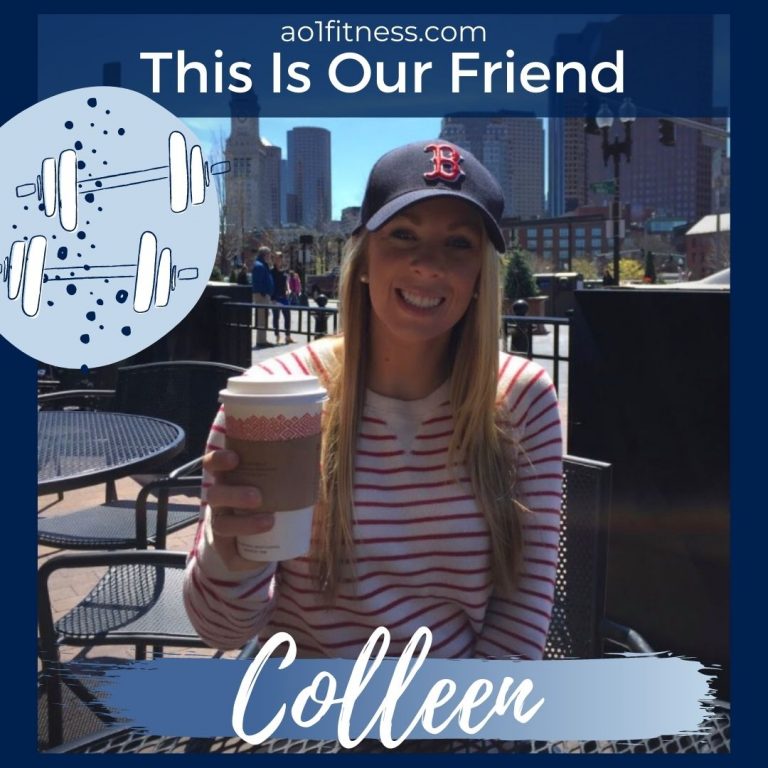 Hi, I’m Colleen, a 33 year old mother of two energetic toddlers. I’m a pretty busy person, self inflicted: I’m committed to my career, I love my kids, I try to spend time volunteering for causes I care about, I love sports. Playing them and watching them.

I grew up playing almost every sport I could get my hands on. I was lucky that my parents rarely said “no” to me. After high school I played college softball in Georgia. It was something I had worked really hard towards for most of my life. After college I really struggled to find a way to fill my hunger for competition and activity. I still loved softball but needed a bit of a change since it wasn’t what I wanted for a career. I took up soccer for a number of years and really loved it. I still laugh at the fact a Div 1 coach took me on, I wasn’t very good; but I worked hard and was pretty fast so they found a way to use me. I also found a liking for distance running and eventually I found crossfit. Needless to say, I never had a problem staying in shape because I was so active.

Just over four years ago I tore my ACL, MCL and meniscus in my right knee. I had dealt with a number of pretty serious injuries before, but this one was especially challenging to recover from. For reasons outside my control, my surgery was cancelled three times. At that time we also got pregnant with our daughter, Blake. It was a challenging pregnancy, I was extremely sick the entire time and wound up preeclamptic. Blake was born a month early. After having Blake I did what I could to rehab my knee and get fit again but I had a long road ahead of me. Nine months ago I gave birth to our son, Jackson. The second pregnancy was again tough, I pretty much puked my guts out the entire time and could only eat bagels with cream cheese, milkshakes, and McDonalds apple pies. As you can imagine, after no physical activities and a diet like that I had a bunch of weight to lose and strength to regain. After two close together pregnancies and being pretty  limited due to my knee injury, I was in rough shape.

Despite the chaos in our lives, I found time to do crossfit a couple times a week. After about seven months though, I had completely plateaued and wasn’t really feeling like I was ever going to be fit or athletic again. It was also getting tough to make class times because I was trying to balance toddler dinner times, bed times and sleep training. As you can imagine, it was just not working. That’s when I sent Stef at AO1 a message. It’s the best thing I’ve done for myself in a number of years.

I began doing individual programming with Stef eight weeks ago. When Stef asked me if I had any goals, I believe my response was: “ please make me fitter again.”  I don’t care about the number on the scale, I never will. And I don’t care about the measurements of my body. I want to win the longest drive at golf tournaments. I want to run faster than all my friends in the TC10K. If I ever play softball or soccer again (still waiting on my knee surgery), I want to be the fastest on the field. It’s easier to score if I’m way ahead of the defence. 🙂

I saw my sister for the first time in a month the other day (we had been apart because of COVID), she commented on how fit I looked. She always says nice things to me so I didn’t think too much of it. But when I got home I decided to step on the scale anyway. I was shocked to see that I’m back to my pre-kids weight! Yikes! How the heck did that happen! I’ve also lost a couple inches off my ‘gut-line’ in the two months I’ve been with AO1. Absolutely crazy considering I ate my body weight in Christmas baking throughout November and December.

Again, I’ve never worked out to be a certain size. And I hope I never do. Where is the fun in that?! Feeling strong again is a good feeling. I struggle to find the words to describe how much joining the AO1 community has meant to me. Everyone is so supportive and encouraging. Working with Stef has been so much fun. She has made every week of programming different. She has found unique ways to work around my various injuries. I feel motivated and inspired again. I always look forward to what I’m going to get to do next. It is so cool to see how much stronger I’ve gotten in such a short amount of time.

The AO1 mindset has carried over to other areas of my life as well. I honestly think I’ve been a better mom the last couple months. I’ve got new found levels of patience and energy (despite having a toddler that wakes up almost every night).  I think I’ve been a better spouse. Going back to work after maternity leave I’m excited to work hard and continue to benefit the organization I work for.

I would strongly recommend AO1 to anyone. The way I see it, there are very few better investments you can make in yourself. As I mentioned above, I started with AO1 to get fitter, but it’s had a much more diverse, positive impacts, on the different fascists of my life. Bonus, I ended up getting fit again too! 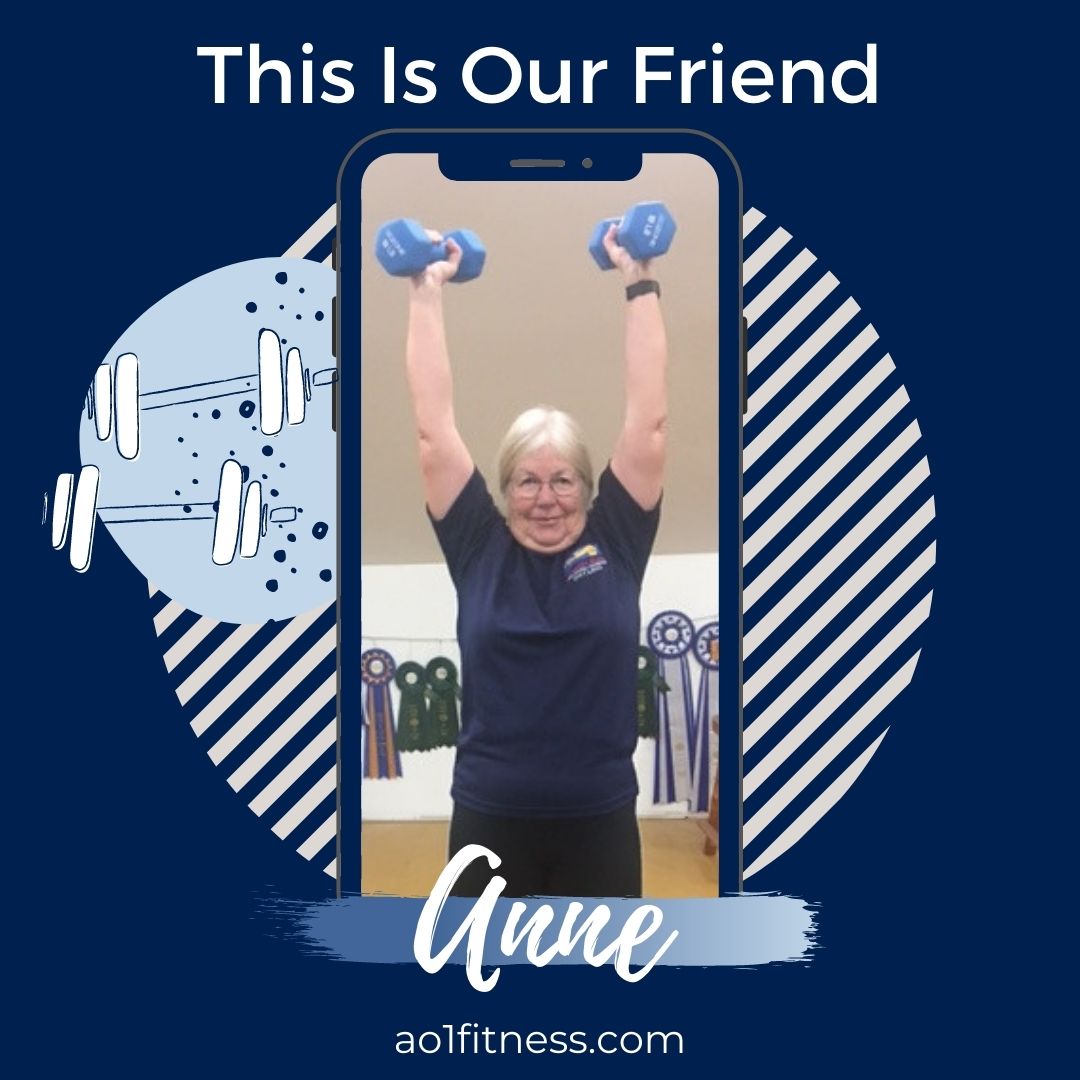 However, the best part is. . . she is inspiring two little girls who get to see their mom and grandma WORKING OUT TOGETHER 3X/week over video conferencing even though they live across the country from each other! 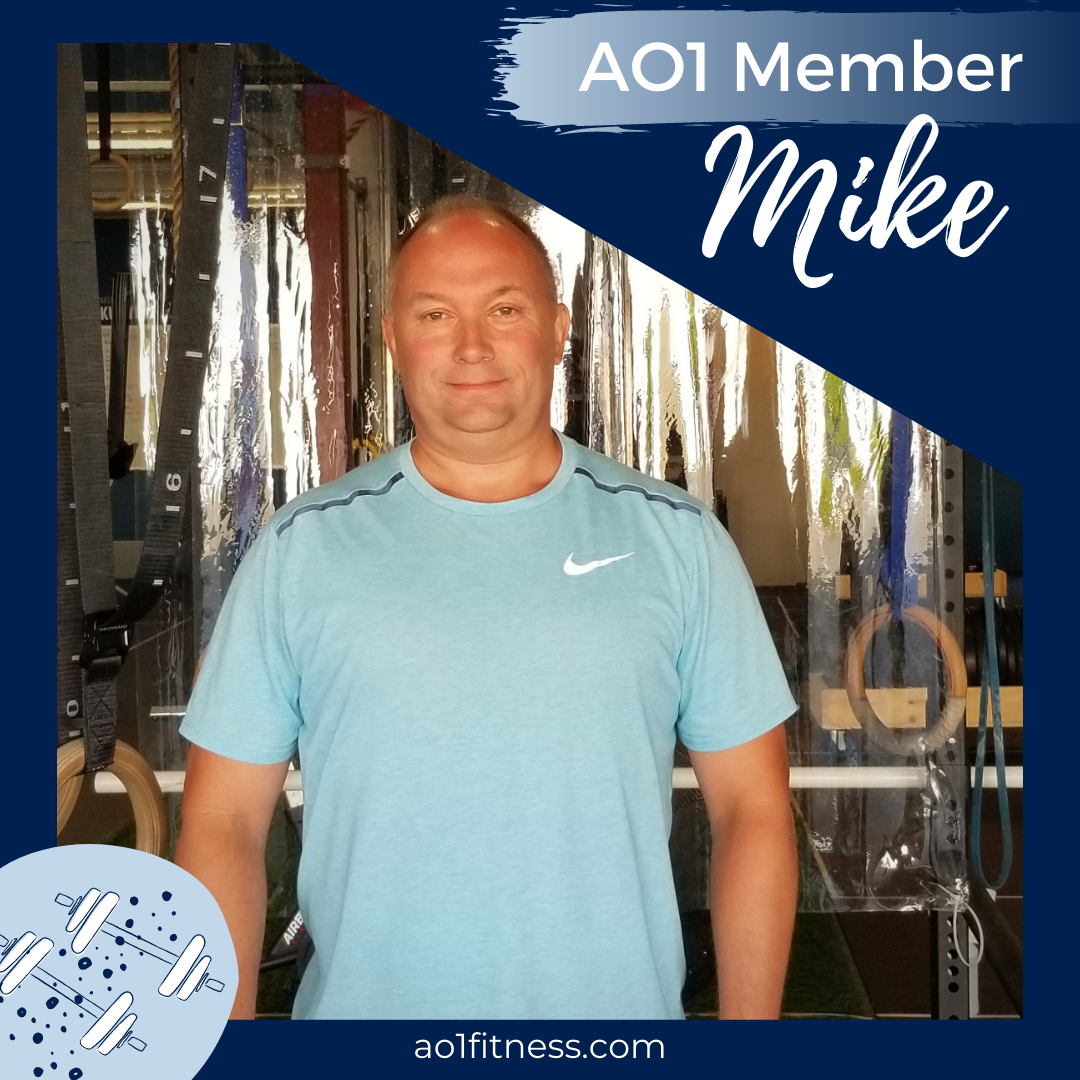 I have been a member of A01 Fitness for a few months now and my only regret is that I didn’t start earlier. Stefanie has taken the time to understand my goals and me as a person. Everybody is different and the customized programs she develops for me clearly reflects her understanding of my mindset, physical characteristics, objectives and other factors. These well developed programs have allowed me to achieve some goals earlier than I could have imagined and have prepared me well for the next challenge. I highly recommend A01 fitness to anyone who is looking for a customized training program.

“Now I’m not getting injured as often, old injuries aren’t acting up as much, I’ve lost a ton of weight, my HbA1c has come down along with my blood pressure, the outside isn’t as scary as it used to be.”