How A Garden Changed My Limiting Belief 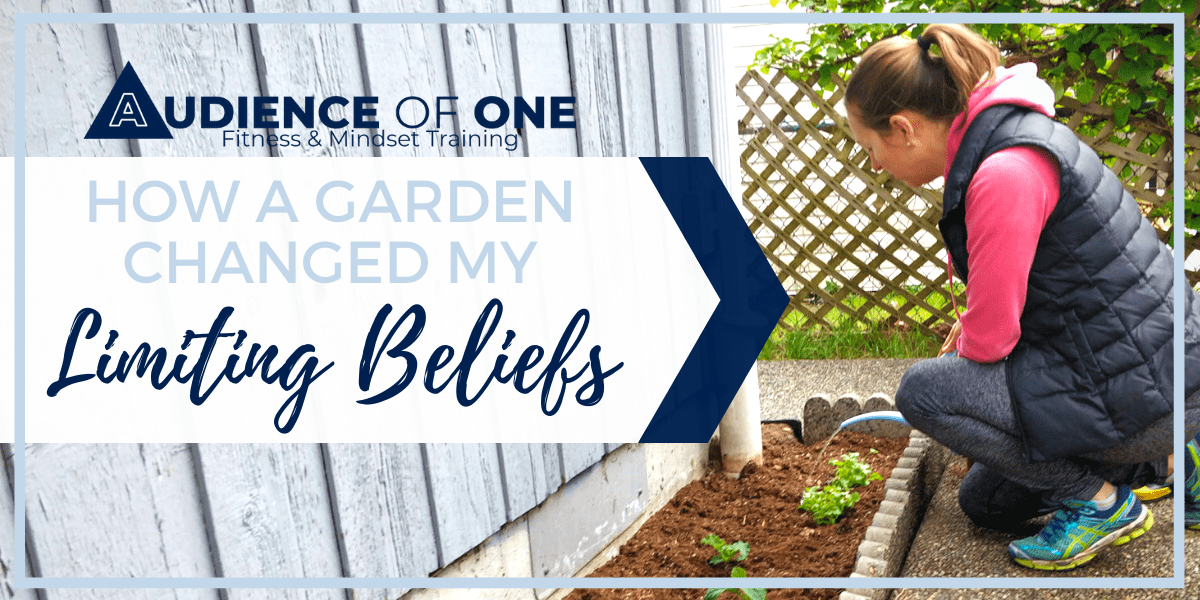 Since we’ve been home so much, we decided to plant our first garden!  We started from scratch digging out the bed for them and just transplanted the little baby plants last week.  It’s definitely a learning experience for us but we’re looking forward to a bountiful harvest (hopefully!)

Our mantra at AO1 is, “you are more capable than you think.”  I also love Marie Forleo’s mantra, “everything is figureoutable.”  For those of you with a green thumb you’ll probably roll your eyes at this story!  However, the reality for me was that I believed I could never grow anything!  I killed almost every plant that came into our home.  In fact, within the first month of dating Alex I told him NO FLOWERS please… chocolate yes!  But no flowers, because they’ll die way too quickly and then it just becomes a chore to bring them to the greens bin.

I’ve never had a desire to start a garden mostly because I didn’t believe I was capable of creating and maintaining one.  That is a limiting belief.  I know this is a super simple example, but don’t we all have limiting beliefs that hold us back?

Yes, it took effort.  All the information felt overwhelming at times.  We’ve already made rookie mistakes. And, it’s not the most exciting project I’ve ever embarked on, but it was a challenge worth conquering!  So off I (and my hubby) went reading books, blogs, watching YouTube tutorials and talking to friends, neighbours and store clerks at the garden store to acquire as much horticultural knowledge as we could.

It is possible that we got it wrong and the plants will not flourish and we will be left with dirt, leaves and no harvest… but we’ve learned a ton and feel strengthened by the accomplishments we have done.  The reality is that I always had the capability of learning this new skill.  The truth wasn’t that I couldn’t do it… the truth was that in the past I wasn’t WILLING to put in the work and effort to learn.

The most important part of this endeavour for me was first to involve our kids in the process. We taught them about the value of work, digging, planting, patience, pruning and the miracle of life.  That could be why I never prioritized this in the past when I didn’t have kids?  They are an external motivation for a lot of new things in life now. Secondly, the most important part was dismantling my limiting belief and proving to myself that I am capable of learning any new skill that I truly put effort in.  Thirdly, we will (hopefully) be blessed this summer with a crop of fresh, nutritious, organic vegetables and herbs.

Your turn!  What have your limiting beliefs prevented you to do?  What are you going to do about it?

You are absolutely capable.  If you get stuck on the “belief” portion of your capability I want you to switch from saying to yourself that you “can’t” do something, to instead saying, “I won’t” do that thing.  99.99% of the time it comes down to your CHOICE.  Will you put in the effort or is it simply not a priority for you?  If it’s not a priority, that’s ok!  Last year a garden was not a priority for me.  Today it is and I am willing to put in the effort to learn what I need to create one.

If you chose to put in the effort, what new skill or project would you accomplish?  Let me know below!

Share this ArticleLike this article? Email it to a friend!
Email sent!